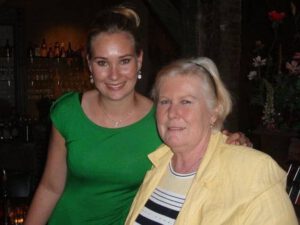 On 1 October 1993, I started my practice for skin and oedema therapy. It was the first practice in Delft and the surrounding area, and a great deal had to be done to provide information about this new profession. Over time, many patients have come to the practice for various treatments. Fortunately, the profession of skin therapy became increasingly well known and developed into a higher professional education (HBO) programme. The profession has grown considerably over the years and is becoming increasingly well known.

Over the years I have supervised many interns, in 2007 Annamarie came to my practice to do an internship. There was an instant connection between us.  After I had let it slip that I would like to stop practising – I had passed the age of 65 – Annamarie responded by saying that she was interested. As a result, a partnership was formed between Annamarie and myself on 1 July 2010. I was able to wind down my activities until 1 July 2012 and Annamarie has successfully found a new home for the practice! Annamarie has worked hard to make Huidzorg Delft what it is today. A great team and a beautiful location, which is a must in Delft.

What is your skin type?

You can find out more about which cookies we are using or switch them off in settings.

This website uses cookies so that we can provide you with the best user experience possible. Cookie information is stored in your browser and performs functions such as recognising you when you return to our website and helping our team to understand which sections of the website you find most interesting and useful.

Strictly Necessary Cookie should be enabled at all times so that we can save your preferences for cookie settings.

This website uses Google Analytics to collect anonymous information such as the number of visitors to the site, and the most popular pages.

Please enable Strictly Necessary Cookies first so that we can save your preferences!