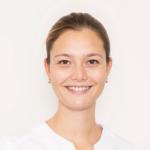 Pigmentation marks, how do you get rid of them?

All about dark spots and how to get rid of them

You may have noticed that after the summer you suffer more from brown spots on your skin. This is what we call pigmentation and in this blog we will explain what it is, how it occurs and most importantly, how to get rid of it.

Pigmentation marks, what are they, and how do they arise?

Pigment is a dye that gives colour to your skin, among other things. The pigment is produced by pigment cells in the upper layer of the skin, also called the epidermis. If the skin is exposed to the sun, it will produce more pigment. This gives your skin extra protection against the sun’s harmful the pigment layer you build up during the summer period is similar to a natural sunshade. Through this protective layer, the DNA in the skin cell nucleus is protected and cannot be activated to become malignant.

Pigmentation stains can be caused by an accumulation of too much pigment. This is called hyper (”too much”) pigmentation. There are several reasons why this accumulation can occur, the most common cause being lying in the sun for too long or excessive use of a sunbed. This often results in pigmentation marks on the areas that have had a lot of sunlight, such as hands, face and neck. Hormones can also play a role in the formation of pigmentation spots, as can the misuse of skin products.
There are different types of pigmentation spot and we would like to tell you more about them.

Superficial pigment is often pigmentation caused by sun damage. This pigmentation is found in the upper layers of the skin. This form of pigmentation often manifests itself later in life. The pigment spots are mainly found on the face, on the neck or in the hands. These are the parts of the body that have had lots of exposure to the sun in recent years. The advantage of this form of pigmentation is that it is located in the epidermal (top) skin layer, which makes it easier to treat these pigmentation spots by using the right laser equipment. We have the Gentle Max Pro laser and the Ellipse Nordlys IPL available for this at our practice. 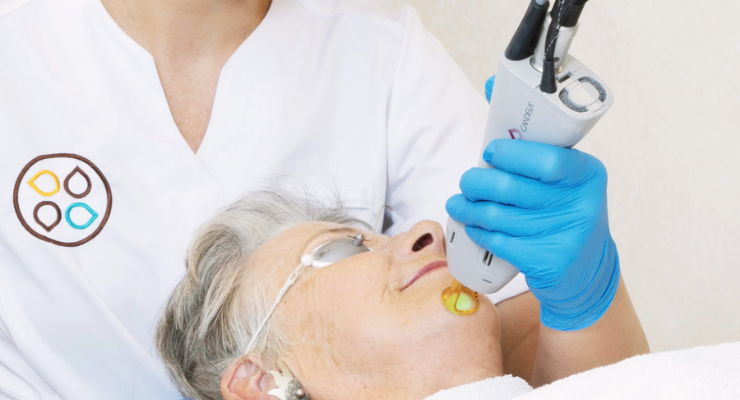 There is also pigment that is present in the deeper (dermal) skin layer. This pigment is often produced by hormonal fluctuations. This pigment can also appear at a younger age and is often seen in women after pregnancy. The term ‘pregnancy mask’ is widely used in this context. This deeper pigment is centred in the deeper layer of skin and consequently more difficult to treat with laser therapy. Fortunately, there is also a suitable treatment for this form of pigmentation, we will say more about this in a moment.

At Huidzorg Delft we work with various laser systems. This enables optimal treatment results to be achieved.
We often see pigmentation that manifests itself later in life, which is why the pigmentation may be scattered throughout the skin and appear blotchy. This can be seen in the picture on the right. In this lady’s case, there is scattered pigment on the cheeks. By using our <a href=”https://www.huidzorgwest.nl/en/treatments/ipl-treatment/”Nordlys Ellips IPL system, we have been able to treat the entire cheek. The great advantage of an IPL system, and in particular of the Nordlys Ellips, is that it also stimulates skin renewal. Due to the large spread of light in the skin, the pigment cells are heated, which destroys them. The heating in the skin, however, also stimulates collagen and elastin cells to become active. As a result, in addition to reducing the pigmentation spots, we also see a clear improvement in skin structure. 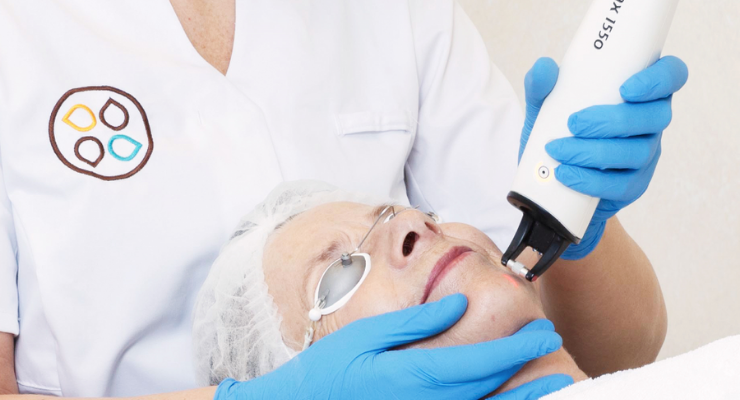 It may also be the case that a separate pigmentation spot is involved, an example of which is clearly visible in this patient. The pigmentation mark is a solitary spot in the skin, and no other pigmentation marks are visible around it. For this type of pigmentation, we often use our Alexandrite laser for the best possible result. As it is easy to cover the entire pigmented area with the treatment head, only the pigment will be treated and not the surrounding skin. As a result, we see very fast and beautiful results in removing or reducing the pigment.

In addition to the two pigment lasers, other treatment methods on pigment spots can also be reduced. In our practice, we often see patients who have developed a form of pigmentation after inflammation caused by acne, for example. This form is called post inflammatory hyperpigmentation. This form of pigmentation can be treated effectively with the fractional laser. This laser reaches deep into the skin and its absorption capacity reduces pigmentation. This laser may also be suitable for deeper-lying pigment. This form of light penetrates deeper into the skin and allows the skin to renew itself, making the pigment lighten or disappear altogether. Eventually, pigment can also be reduced with our latest treatment. The Spot Out treatment is the pigment treatment for deeper pigment. The ingredients in the spot out treatment ensure that the pigment cells are reduced and disappear without affecting your own skin colour. The ingredients stop the enzyme conversion that causes pigment cells to turn dark. By stopping this process, you will restore your even skin tone, even with difficult to treat pigment!
Are you excited and dare to take the step to tackle those pigmentation spots? “Then please arrange an appointment

What is your skin type?

You can find out more about which cookies we are using or switch them off in settings.

This website uses cookies so that we can provide you with the best user experience possible. Cookie information is stored in your browser and performs functions such as recognising you when you return to our website and helping our team to understand which sections of the website you find most interesting and useful.

Strictly Necessary Cookie should be enabled at all times so that we can save your preferences for cookie settings.

This website uses Google Analytics to collect anonymous information such as the number of visitors to the site, and the most popular pages.

Please enable Strictly Necessary Cookies first so that we can save your preferences!